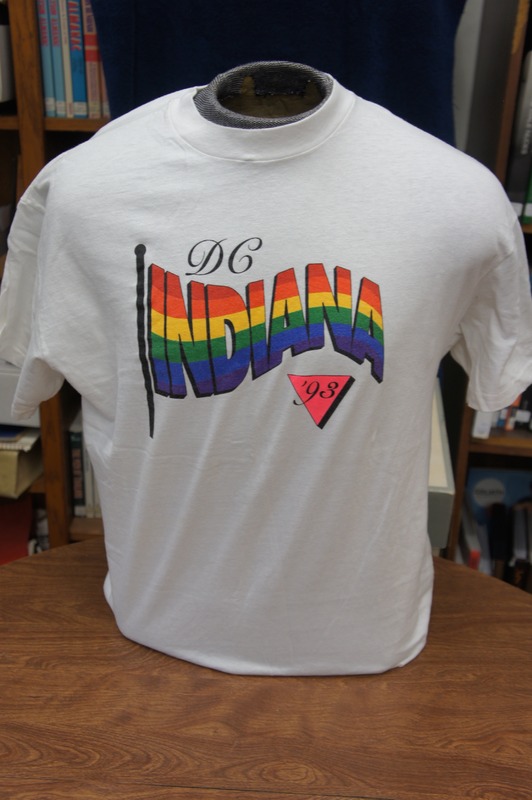 T-shirt representing one of the some 2,000 Hoosiers who attened the March on Washington for Lesbian, Gay and Bisexual Equal Rights and Liberation in 1993

After successful marches in 1979 and 1987, the gay community organized the 1993 March on Washington for Lesbian, Gay, and Bi Equal Rights and Liberation in an effort to continue momentum in raising awareness of their causes into the 1990s. Organizers published an extensive list of demands, including a national GLBT civil rights bill, an end to sexist and racial discrimination, increased funding for AIDS research, and repeals of sodomy laws nationwide. Outside of the Internal Revenue Building, gay and lesbian couples held mock wedding ceremonies, protesting the ban on such domestic partnerships. Massachusetts, the first state to legalize gay marriage, wouldn’t do so for another eleven years.1

Still, to many of the young marchers, born before the homophile movement and early gay rights movement of the early 1970s, the march served as one of the first community gatherings in their lifetimes. “This is my time for civil rights... This is my time, a time for me to get recognized as a human being just like any other," said Jana Johnson, a college student from Chicago who traveled by bus with 45 other students to attend the march in Washington.

Over two thousand Hoosier citizens descended on the nation’s capital, including some 300 who marched in a parade behind an Indiana banner past the White House. For some Indiana residents, the march’s ability to encourage openness was a welcome change from their upbringing in the rural Midwest. Bill Jack, a physical rehab worker from Plymouth noted his otherwise conservative politics. Still, “To see everyone here be so openly gay and not afraid, and not denying who they are, is such a great thing." Another marcher, a 49-year old woman who asked for anonymity because her “parents would never understand” discussed how she graduated from Evansville Central High School in 1963. She remained in the closet for many years before divorcing her husband and coming out as a lesbian in 1987. She helped organize the 1993 march. “My being here in something like this is overdue. I hope what it shows to everyone is that we gays are your bankers, your doctors, your lawyers, wives, husbands, sons and daughters," she said. "When people know that, how can they hate us?"2

April 25, 1993-  March on Washington for Lesbian, Gay and Bi Equal Rights and Liberation