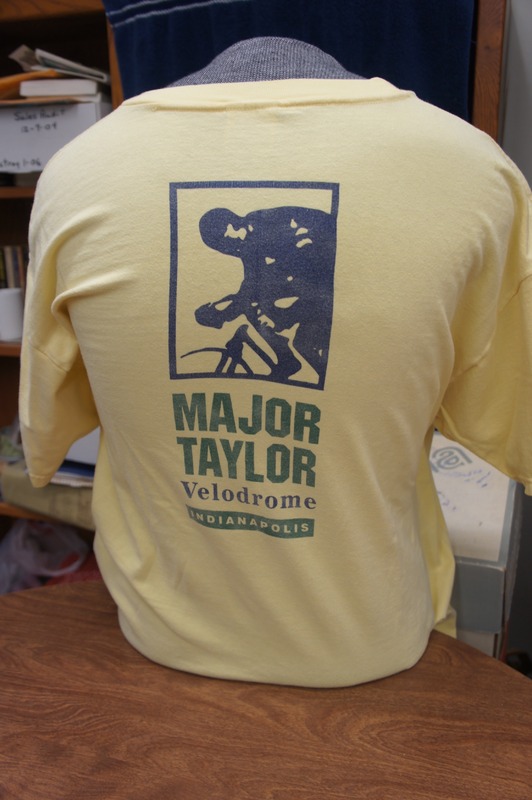 Amidst the hundreds of pride and HIV/AIDS related t-shirts that the Chris Gonzalez Library and Archives stores, some of these artifacts required greater investigation to fully understand their LGBT connections. Upon uncovering this t-shirt from Indianapolis’s Major Taylor Velodrome, library coordinator Michael Bohr conceded that while the t-shirt has no formal LGBT association, it does allude to the controversial practice of cruising, or the practice of the solicitation of sex in public places, near the Velodrome.  Bohr suggested that the Velodrome’s building location was suspected to be selected to combat and ultimately end the site’s popularity, close to Indiana University-Purdue University campus, of cruising among gay men.

Although this allegation cannot be fully substantiated, the site is highlighted on a portion of the Americans for Truth about Homosexuality’s website, under the heading “Not in My Backyard – Indianapolis ‘Cruising for Sex’ Locations.”  Americans for Truth about Homosexuality claims itself as "a national organization devoted exclusively to exposing and countering the homosexual activist agenda." Attempting to expose these cruising spots, the AFTAH hosts Internet comments of suspected cruisers. Unlike other maligned groups, the LGBT community’s continued seclusion and secrecy is sometimes problematic, manifesting in often considered controversial practices, like cruising.  According to one post, a self identified IUPUI professor claimed he was unfairly targeted at a restroom on campus. “[I] could feel this cop’s eyes burning into my back […] A comment was made about ‘faggots’ all over the place.”

In 2012, Southern Poverty Law Center labeled the AFTAH a hate group for spreading "hateful propaganda", and claiming that homosexuality can be "cured."1