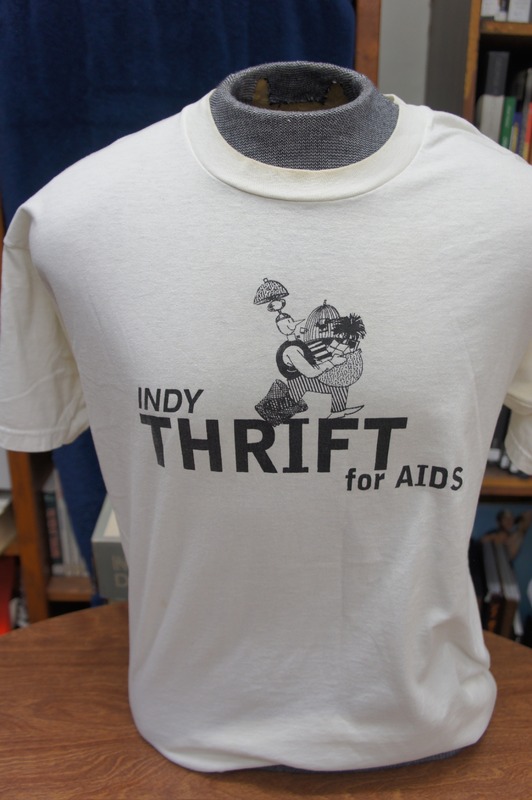 The Bag Ladies weren’t the only members of the gay community attempting to fight back against public ignorance of the HIV/AIDS epidemic. Indianapolis responded to the growing HIV/AIDS crisis in multiple ways. This shirt came from Indy Thrift for AIDS, a community thrift store that opened in the 1990s. Indy Thrift sold apparel, furniture, house-wares and other items with proceeds used to fund local HIV/AIDS service organizations.  Local organizations like Indy Thrift, the Indiana AIDS Fund, and their alliances with other gay businesses like bars and clubs provided much needed financial assistance to fight the spread of the disease. In June 2002, for example, the Indianapolis Bar Our Place donated over $50,000 to Indy Thrift and the Indiana AIDS Fund.

Michael Bohr, founder of the Chris Gonzalez Library and Archive, worked at Indy Thrift for AIDS for a number of years. During his tenure at the organization, he began collecting t-shirts, the bulk of which make up most of the current clothing collection at the archive. Indy Thrift for AIDS closed in 2006. 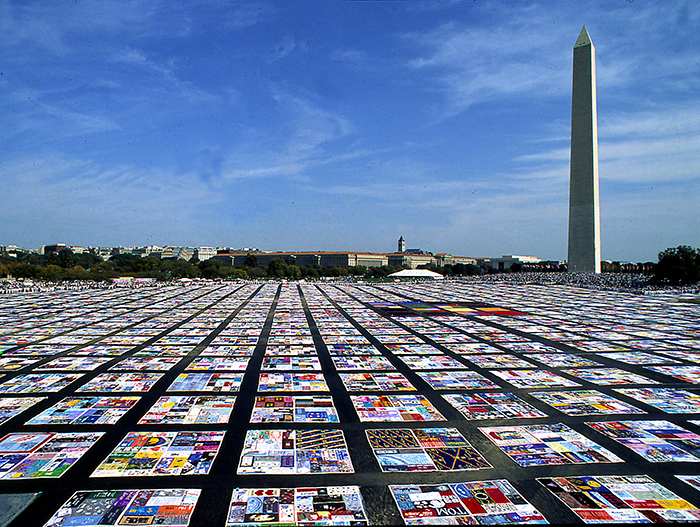 The display of The AIDS Memorial Quilt in Washington, D.C., October 9 through 11, 1992, covered thirteen acres and contained 20,064 panels.1 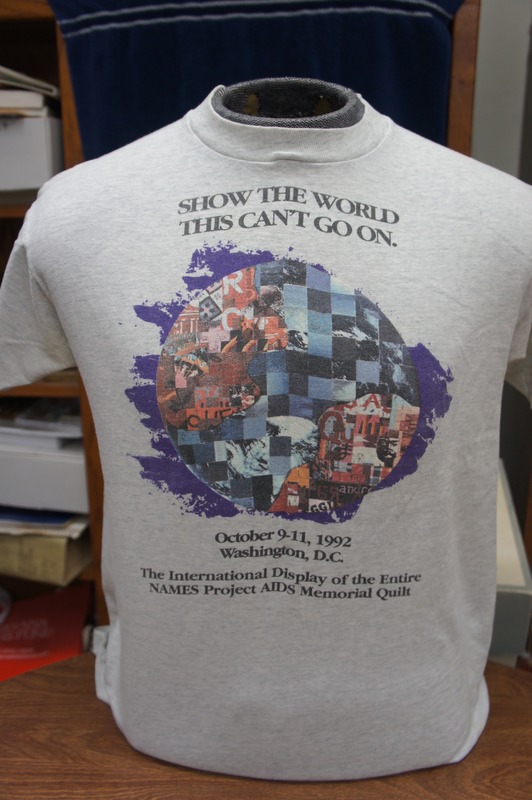 Show the World This Can't Go On

Along with numerous activities to raise money to fight the ongoing AIDS epidemic, including charity walks, runs, and bike races (many of the shirts from these events can be found in the collection), others focused on memorializing victims of the crisis. One of the most recognizable symbols of pandemic is the AIDS Memorial Quilt. Cleve Jones, a well-known San Francisco gay rights activist, began the quilt in November 1985 and formed the NAMES Project Foundation. Jones envisioned each panel of the quilt to represent one victim. The first panel created was in memory of Cleve’s friend, Marvin Feldman.

Just after its initial creation, thousands of volunteers sent in panels, sewing machines, and other materials to support the project. The first display of the entire quilt occurred on October 11, 1987 on the National Mall in Washington D.C. to correspond with the gay and lesbian march on the capital that year. Over half a million people visited the nearly 2,000 panels that weekend.  The quilt’s popularity led to a national tour and a fundraising of $500,000 in 1988.

This shirt symbolizes the fourth display of the AIDS Memorial Quilt in Washington, DC. In 1992, every state in the United States and 28 countries were represented on the quilt. As of 2014, the quilt consists of 47,000 panels to commemorate more than 93,000 victims of AIDS.2

Just like names on a t-shirt in honor of victims of transgender violence, the AIDS Memorial Quilt gives weight to a serious issue by suggesting the enduring legacy of individuals among many. The message of the quilt and the t-shirt implores Americans to understand that the victims were actual people, not simply numbers in a statistic.

2. The AIDS Memorial Quilt, "History of the Quilt," www.aidsquilt.org/about/the-aids-memorial-quilt↩